ITMA board member Donald Redelmeier is one of the authors of an important article named “Impact of medical fitness to drive policies in preventing property damage, injury, and death from motor vehicle collisions in Ontario, Canada” recently published “in press” and on line in Journal of Safety Research

This article evaluates the road safety impact of medical fitness-to-drive policies and road safety losses during the time when medical cases were still under review and the driver still active (no losses found) and what number of crashes that were prevented by the work with evaluating medical driver fitness. Quite a few collisions were prevented but the interventional effect of the medical review program differed by medical condition.

We are thankful for your continuous trust and strong support. We are looking forward to meeting you again in October 2021 in Shanghai, which will be a great gathering for our old and new friends in the transportation field.

Association Between Statin Use and Risk of Dementia After a Concussion

Read the full research in the article below.

Road traffic injuries are the leading cause of death among young people. Recognising the role of impulsive tendencies in risk taking behaviour may help novice drivers to behave more safely. Previously, a brief intervention focusing on impulsive traffic behaviour, conducted by psychologists in driving schools, has been effective [1, 2]. Following the success a new intervention study was carried out but this time the intervention was conducted by regular driving school teachers, who had previously been trained to carry out the intervention. The new intervention, similarly to the previous one, significantly decreased prevalence of traffic collisions and lowered general traffic risk (occurrence of either a recorded traffic offence or a collision). The association of impulsivity measures and candidate gene variants with risk-taking behaviour in traffic and the efficacy of the intervention is also analysed and discussed in the study. Read more in detail here!

The journal file is closed until January 2020 because the period of embargo for Acta Neuropsychiatrica journal is 6 months.

Here you can find the Abstracts from the Brasil World Congress. 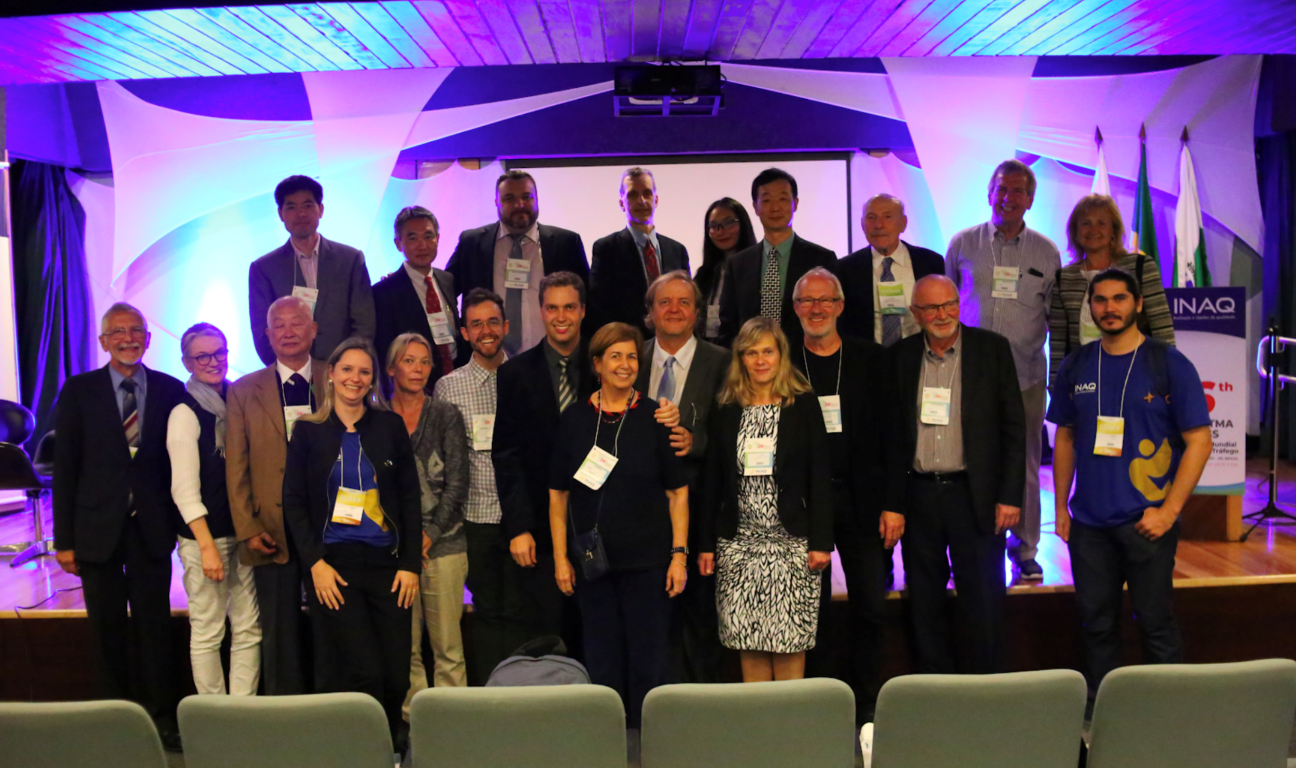 Every two years ITMA elects a country to host its congress. In 2018, Brazil hosted PhDs and researchers from more than ten countries (including United States, Japan, Canada, Sweden, China, Estonia, Argentina, Costa Rica, German and Brazil) in order to discuss about traffic in a global scope. The 26th ITMA World Congress organized by INAQ, was held at Pontifícia Universidade Católica do Paraná – PUCPR, in Curitiba, from October 30 to November 1.The congress debated issues on medical specialties and other fields of expertise such as Psychology, Engineer, Law, Road Safety, Education and Public Administration, aiming to find measures to decrease the number of deaths and consequences of road accidents.

The organization of the 26th ITMA CONGRESS had the Company INAQ – AVALIAÇÃO E GESTÃO DE QUALIDADE (INAQ – Quality Assessment and Management) of the city of Curitiba, Brazil.

The pre-congress activities consisted in three workshops and oral presentations of scientific papers. The workshops themes were “Cardiovascular evaluation on physical and mental fitness to drive”, “Pre-hospital care in Curitiba: ‘From prevention to care’” and “Elderly driving behavior: How to evaluate it? An expert approach”.

The second session was themed Psychology, Law, Education, Prevention and Risk behavior, counting with the papers: “Cyclists in high risk: traffic psychology and Vision Zero approach for better understanding and solutions” from María Cristina Isoba (speaker) and Alberto José Silveira, both ITMA members from Argentina. Also “Imprudence in the transportation of children, situations that can influence on safety”, “Knowing the Brazilian Traffic Code and the proper use of safety devices for children under 10 years old”, “Situations that may influence care when transporting children”, “The elderly and traffic accidents: education as a trauma prevention strategy”, “Traffic pastoral care, a spirituality of care”,

The third session, themed, Engineering, Management and Safety gave space to the papers: “Brazilian road safety legislation: review and analysis 1998 – 2017”, “Electronic inspection influence over the motorcyclists mortality in the city of Campina Grande, state of Paraíba”, “Hybrid vehicles safety ranking by use of a multicriteria analysis method”, “Land transport accidents related to work in Goiás, 2010 to 2017”, “Prediction of injury in traffic accidents using Machine Learning techniques”, “Prevalence of accidents with motorcycles and intake of alcohol in the city of Campina Grande, state of Paraíba”, “Traffic crashes and precipitation relationship obtained by multivariate analysis”, which was elected by examiners as the best paper, and “Evaluation of pedestrian crossing at a signalized intersection using microsimulation”.

The second day of Congress began with the Session 1, entitled “Trauma care services, and hospital costs”, which included the presentations of Dr. Mariana da Matta, Emergency physician in private hospitals and SUS, Rio de Janeiro, who talked about “Traffic collisions and its relation with the use of amphetamines by professional drivers, despite the prohibition (production, prescription and use) in Brazil”, Márcio Roberto Muniz, Nurse assistant at SIATE, who talked about “SIATE Curitiba – 28 years of pre-hospital care”, Dr. Juliano Gasparetto, Hospital Cajuru Technical Director – Brazil, explained about “The impact of traffic accident on hospital costs”.

Session 4 – Traffic Law was the theme of this session, coordinated by Danilo Oliveira da Silva, from Pró Saúde.
At 1h30pm, Rochane Ponzi, , Comissão Especial de Trânsito (Special Traffic Commission) from OAB-RS – Brazil, talked about “A prova acusatória nas infrações por embriaguez no volante” (The accusatory evidence on drunk driving violations). At 1h50pm, Marcio Dias, from Comissão de Direito de Trânsito (Comission on Traffic Law) – OAB-RJ – Brazil, explained about “DPVAT – os procedimentos de indenização, número de mortes, motivos de negativa, a importância dos laudos médicos” (DPVAT – damages procedures, number of deaths, reasons for denail, the importance of medical statement), at 2h20pm, Luiz Otávio Maciel Miranda Advisor at DETRAN/PA – Brazil presented his thesis on “Instrumentos jurídicos das Nações Unidas sobre segurança viária e a importância da adesão dos países a esses instrumentos” (UN legal instruments on road safety and the importance of the accession of countries to these instruments).
At the end of the speech, Dr. Luiz Otávio Maciel Miranda asked permission from the organzers before gifting Dr. Enrique Arrayas, from Costa Rica, a copy of the United Nations Vienna Convention on Road Traffic, 1968. The Convention was published by UN’s Economic Commission for Europe (UNECE), and signed in November 8, 1968, turning 50 years in 2018. He emphasized the role played by Costa Rica on ratifying the text and becoming Part at the accord, alongside Brazil, Guyana, Peru, Uruguay and 73 other countries that have acceded to the Convention.

Session 5 – Non-governmental entities commited to traffic safety, was the topic of this session, coordinated by Master and Psychologist specialist in traffic Maria Elaine Andrade Celeira de Lima, INAQ Director, who spoke about activities performed by her company in behalf of education and traffic quality. The session started at 2h50pm and counted with participation of Mrs. Anaelse Oliveira coordinator of the Programa Volvo de Segurança no Trânsito who apoke about “O compromisso da iniciativa privada para a segurança viária” (Private sector commitment for traffic safety) and of Mr. Fernando Diniz, Engineer and President of the NGO Trânsito Amigo, who spoke about his work to increase awareness for traffic safety.